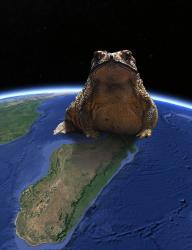 The recent introduction of the Common Asian Toad to Madagascar has led to fears that the toxic amphibian could wreak havoc on the island’s already severely threatened fauna. Now, a international research team led by MEFGL scientists reported genetic evidence in the journal Current Biology (on June 4) showing that those fears are well-founded: virtually all predators native to Madagascar are highly sensitive to toad toxins. If they should eat the toads, it would be a potentially fatal mistake.

“In Australia, the introduction of cane toads has caused profound perturbation to many ecosystems by removing key predators from local food webs with their toxins,” said Wolfgang Wüster of MEFGL, Bangor University, United Kingdom, who coordinated the study. “Similar effects are likely to occur in Madagascar, where toads were never present before, as well: predators that frequently feed on toads and do not rapidly learn or evolve to avoid them are likely to become much rarer or possibly extinct.”

Bufonid toads secrete bufadienolides that are fatal to many predator species by inhibiting the sodium-potassium-pump (Na+/K+-ATPase), an essential component of animal cell membranes. However, in the native range of toads, some predators have evolved resistance to these toxins through repeated, predictable and specific point mutations in the gene encoding that essential enzyme. However, predators in hitherto toad-free regions often lack these adaptations. As such, the arrival of the toxic and invasive Asian toads (Duttaphrynus melanostictus) to Madagascar prompted vigorous debate over their likely impact and the actions that should be taken to control or eradicate them.

“A crucial knowledge gap has been whether native Malagasy predators are indeed sensitive to toad toxins: this has been widely assumed by conservationists, but without concrete evidence,” said co-author Andolalao Rakotoarison, co-chair of Madagascar's IUCN Amphibian Specialist Group.

To fill that gap, the researchers analyzed sequences of the Na+/K+-ATPase gene of 77 Malagasy species potentially feeding on toads, including 27 snakes, 2 lizards, 12 frogs, 8 mammals and 28 birds. Their studies showed that only one native species—a rodent known as the white-tailed antsangy—showed evidence of resistance to the novel toxin.

The results strongly suggest that invasive toads are liable to have significant impacts on the native Malagasy fauna, and stress the importance of controlling the spread of this alien species to prevent a worsening biodiversity crisis, according to the researchers.

“Our findings confirm that the invasive toads are likely to have a significant impact on many Malagasy endemic species, adding to the country’s existing conservation problems and potentially endangering many of Madagascar’s most iconic endemic species, such as tenrecs and the enigmatic fossa, as well as a plethora of other species,” said co-author Nicholas Casewell, of the Liverpool School of Tropical Medicine.

Co-author Frank Glaw, a specialist in Malagasy amphibians based at the Bavarian State Collection of Zoology, noted that the toad's tadpoles might also threaten endemic fish as well as invertebrate predators including water beetles, dragonfly larvae, and crustaceans. A similar study is therefore needed to assess the vulnerability of Madagascar’s aquatic predators.

MEFGL Masters student Ben Marshall, who led this project for his degree, said: “This is another example of how species introduced from one part of the world to another can disrupt natural ecosystems. Preventing the introduction of alien invasive species must be a top priority for biodiversity conservation.”