We know that trade and transport of ivory is strictly controlled to safeguard the elephants, and that other animal by-products such as the use of rhino horn is also controlled in an attempt to clamp down on the poaching and illegal trade which affects some of our most threatened species.

The list extends beyond those charismatic species that we’re probably all familiar with.

The organisation responsible for regulating and monitoring trade in wildlife products is the Convention on the International Trade in Endangered Species (CITES), to which 183 countries are signatories. 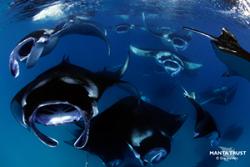 Another group of species, the devil rays, has now joined that list following a recent CITES meeting, and as of today (4 April 2017) the new regulations will be implemented. One Bangor University student is to play a part in the safeguarding of the devil ray and the already protected manta ray.

Jane Hosegood is studying a PhD at the University and is developing genetic tools to identify devil rays and their parts, along with their sister-group, the manta rays. The team are working towards tools which will be able to identify a manta ray or devil ray to species level from small samples, and will also be able to identify which specific population, and therefore location, the ray came from.

Jane is working alongside Prof Gary Carvalho and his team within the Molecular Ecology and Fisheries Genetics Laboratory at the University’s School of Biological Sciences. The team are world leaders in using genetic markers to identify fish species and populations, and their genetic tools to identify a wide variety of fish are now widely used to safeguard global fish stocks.

Jane attended the recent CITES meeting in Johannesburg along with colleagues from the Manta Trust and TRACE Wildlife Forensics Network and so saw first-hand how events unfolded. Among the topics up for discussion was a proposal to list all species of devil ray, (Mobula sp.) put forward by the government of Fiji.

This recent success of this proposal highlights the importance of the work being carried out at Bangor University. The ongoing development of genetic identification tools which can identify a manta or devil ray, or any of its parts, down to species and regional level will assist those charged with enforcement and monitoring of CITES regulations. 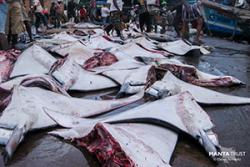 Both devil and manta rays are fished in huge numbers to supply the international demand for their gill plates, which are used as a pseudo-remedy in some traditional medicines. This trade is unsustainable, with these species being unable to recover from such levels of exploitation, due to the very slow rate at which populations reproduce.

The fact that they are now to be regulated under CITES is excellent news. This is not just beneficial for the devil rays – but mantas too.  Mantas were listed in 2013, and so trade in manta parts has been regulated for the last few years. However, due to difficulties identifying between the gill plates of different species, specialist training was required to distinguish between listed manta parts, and unregulated devil ray parts. In light of the recent resolutions for the devil rays, all gill plates are now regulated, and so it is no longer possible to hide manta gill plates among devil ray gill plates.”

“Essentially what we are doing is taking tissue samples from individuals of known species and sequencing short fragments of the DNA that they contain.  This allows us to build up a picture of the genetic signatures of each species and population, to which we can compare samples from an unknown individual or part. This assists us in identifying which species it came from.

Michael Scholl, CEO of Save Our Seas Foundation said: "We are proud to support research like this, because it provides a very practical solution for conservation success. Effective enforcement is a critical step in the conservation process and without genetic evidence, it would be very difficult to achieve.” 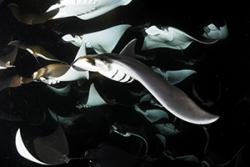 Nida Al-Fulaij, Grants Manager at the People’s Trust for Endangered Species), explains, “Conservation of our endangered species can only be effective when it is underpinned by sound science. The research undertaken by Jane and her colleagues at Bangor University is an important step in enabling identification at species level so trade in all species of manta and devil rays can be properly monitored.”